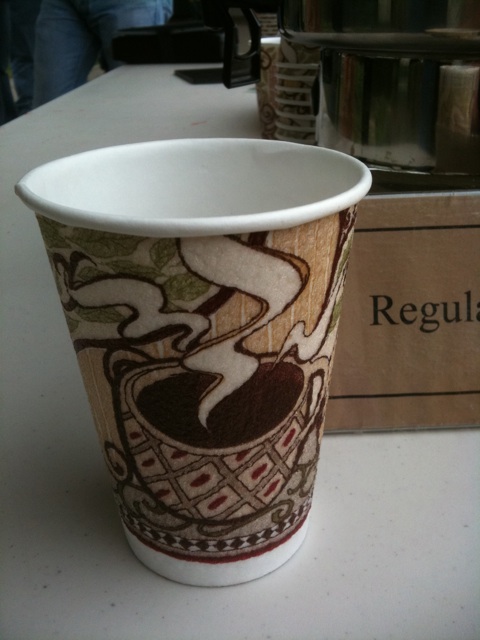 NOTES: Sunday morning at The Well in Buda.  As for the coffee... judge not, lest ye be judged.


- Posted using BlogPress from my iPhone
Posted by PM Summer at 12:04 PM No comments:

What has Brown done for you? 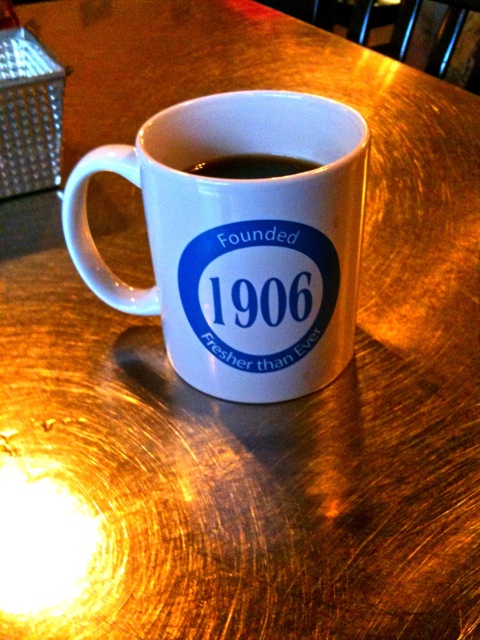 NOTES: Breakfast at the Brown Street Cafe in Ennis, Texas, across from the police station/city hall/municipal court. I didn't ride my bike.


Posted using BlogPress from my iPhone
Posted by PM Summer at 8:15 AM No comments: 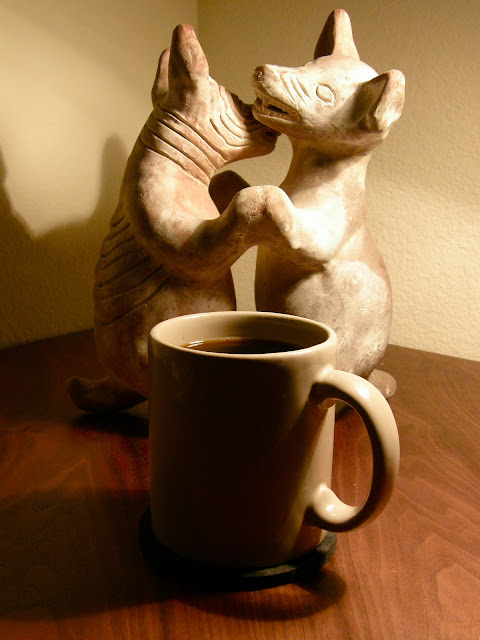 MUG: One of my German-made Waechtersbach coffee mugs, the standard by which all mugs are judged.

NOTES: This is my personal ideal combo of mug and coffee, the pairing that gives me the most satisfaction. I can improve on it slightly by using my French Press instead of the Melitta filter system, but only slightly, and at far greater inconvenience.

This is the first day since I was relocated to Kyle in the general exodus that I have been able to enjoy this combination of goodness. Heretofore, either the coffee was missing, or the mug. The opening of a recent box revealed the mugs, while a trip to Dallas last week to fetch lawn equipment resulted in the beans.
Posted by PM Summer at 5:54 AM No comments:

Any port in a storm? Nah, safe harbor. 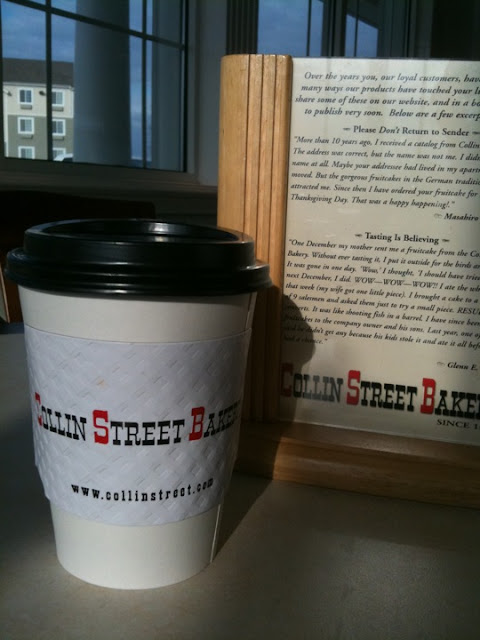 COFFEE: Costa Rican Cinchona coffee from Collin Street Bakery's Bellemead location. Not bad. Not bad at all. Very slight "burlap" taste, which is new to me, but brewed strong.

NOTES:  After taking six hours to travel 120 miles (due to the end of Spring Break and Austin's SXSW drunk-fest), I needed a rest (and an escape). Rather than fight the stop-and-go traffic on I-35 the rest of the way to Dallas, I took my escape cut-off route of State Highway 31 to Corsicana and I-45. Collin Street Bakery has one of their Deluxe Highway Shops at that intersection (I-35 and SH-31), so I stopped for coffee and a date bar. I also bought three of their fruit cakes (regular DeLuxe, Texas Blonde Pecan, and Apricot Pecan). These are so wonderful! Fooey on all you fruitcake haters, you are simply giving in to peer pressure and easy prejudice (another sign of The Fall).
Posted by PM Summer at 8:54 AM 1 comment:

COFFEE: Brazilin sweet yellow Bourbon beans from Daterra Farms (Rainforest Alliance Certified). Roasted and sold by White Rock Coffee. A tad under roasted for my tastes, but flavorful at my preferred strength. Picked up a pound of this the last time I was in Dallas. Ever searching.

NOTES: "Victory or death" - William Barrett Travis. That's what it says on the reverse side of the mug. Incongruous sentiment for a latte.

An aside: "Victory in death" is what it says on my heart.
Posted by PM Summer at 7:36 AM No comments:

The gilded art of bunting. 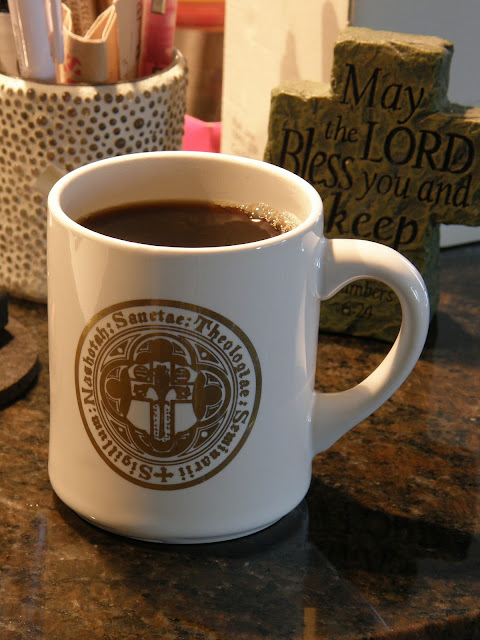 MUG: A gold foil dinnerware mug from the refectory at Nashotah House Theological Seminary in Nashotah, Wisconsin. A very pleasant instrument of caffeine administration, it was made by the W.C. Bunting Company in Liverpool, Ohio. Well balanced, with a nice handle and lip, this mug is a superior, though unassuming, object. One of my favorites, it is a "hand wash" only utensil.

NOTES: I liberated this old mug while attending Nashotah House during summer session one year. I replaced it with a modern version from the school's bookstore. The late comedian George Carlin's comments on bunting in baseball vs. blitzing in football are forever with me.
Posted by PM Summer at 9:06 AM No comments: 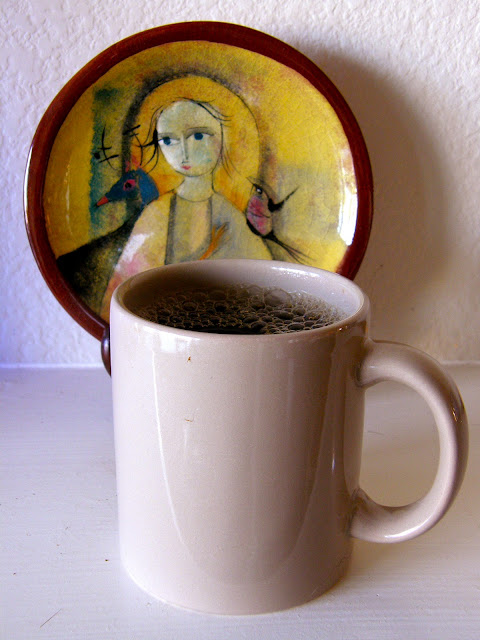 MUG: Waechtersbach, made in Spain instead of Germany. Regular readers (both of you) know that I hold my 35 year old German-made examples of this mug (in this color) to be the epitome of the mysterious coffee mug arts. This Spanish version seems a bit lighter in weight, and the tint is to the brown as opposed to the lederhosen grey of my older Deutschemugs. Nonetheless, it is a fine drinking instrument, and is my old friend of consistent solace.

COFFEE: Mexican Organic Flores beans from Anderson's in Austin. Nutty flavor (not flavored) that is quite enjoyable. The best of the locally-sourced beans I have found. Small-batch roasted.

NOTES: The beans were a gift from a new friend I had never met, but did finally meet over a pint (or three). A charming fellow, whose tastes had always impressed me. My impressions have been confirmed. Truly, a scholar and a gentleman (really).

The beans were sourced from the first independent coffee shop I ever frequented, back when I lived in Austin in the early to late 1970s. Bought my first Braun coffee grinder there, as well as many a Melitta coffee pot (they had a tendency to break in my households at the time... knives and other domestic utensils were known to fly across rooms as well). Surprised and pleased to know the company is still in business, and still in the same location.

An old friend made new again. Thanks, Carter.
Posted by PM Summer at 8:32 AM No comments: