Be still, and drink coffee. MUG: A generic, ubiquitous Chinese-made imitation of a Waechtersbach cylinder mug. It's ubiquitous for a reason. It works.

NOTES: This mug is of the Radio Free Babylon internet 'comic' strip Coffee With Jesus, and was produced in conjunction with the publishing of a book of the internet cartoons by Intervarsity Press. I won the mug, and a copy of the book, by having this mug selected as the single most tasteless, tackiest coffee mug posted on their Facebook page. A British mug of Charles and Diana came in second.
Posted by PM Summer at 6:27 AM No comments:

This is my 'Happy Face'. MUG: Nothing you haven't seen before. Waechtersbach (made in Germany). I've got nothing more to say on the matter (today).

COFFEE: Not coffee, which hasn't really been tasting very good since my case of "...an influenza-like upper respiratory infection" (so said the attending Physician). Today I am drinking some Taza Chipotle Chili Chocolate Mexicano, a stone-ground 70% dark "Mexican-style" chocolate in tablet form, from that renowned center of Central American cuisine... Massachusetts. It's about 500% more expensive (and not even close to being 500% better) than the authentic item from Mexico, but the word 'chipotle' causes my wallet to open... at least once.

NOTES: It's a cold morning. It's spicy hot chocolate. I have a cat on my lap. The 'Happy Face' mug is appropriate.
Posted by PM Summer at 8:22 AM No comments: MUG: A 'diner' mug. Probably from China. Heavy, and drinks like all the other diner mugs I have. That's a good thing.

NOTES: I bought this mug yesterday morning while meeting up with some fellow MINI drivers for a day's cruise. The shop was aptly-but-oddly named Local Coffee. Aptly, because it's a local company with three locations (we were at the Sonterra store). Oddly, because the coffee they serve is roasted in Dallas (the bagged coffee they sell is Stumptown from Portland). That's not a bad thing, because the coffee was excellent... and the barista made it a point to mention that the coffee isn't "over roasted" (I'm talking to you, Austin).

I sampled their daily drip, and it was the thinnest cup of coffee I have ever been served, even though it was just a sample. Seriously, it looked like tea. I made a puzzled remark, the barista made a mildly condescending remark back, and my visit was about to spiral down when I noticed the array of drip makers at the counter, both Chemex and Clever coffee makers. I looked to the menu and saw "slow drip" coffee as a $2.50 option. The coffee was a Colombian, and I bought it. It was a great cup of coffee (really almost two cups... it came in a 16 ounce leather-thermal-wrapped Mason jar), brewed in a Chemex, and it put the mystery of the coffee-tea behind me. 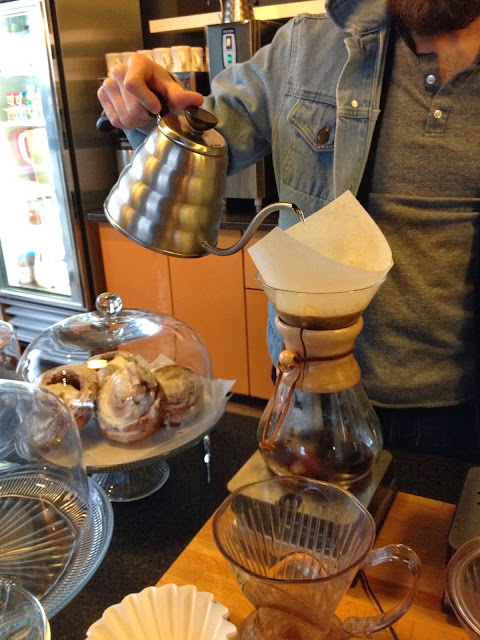 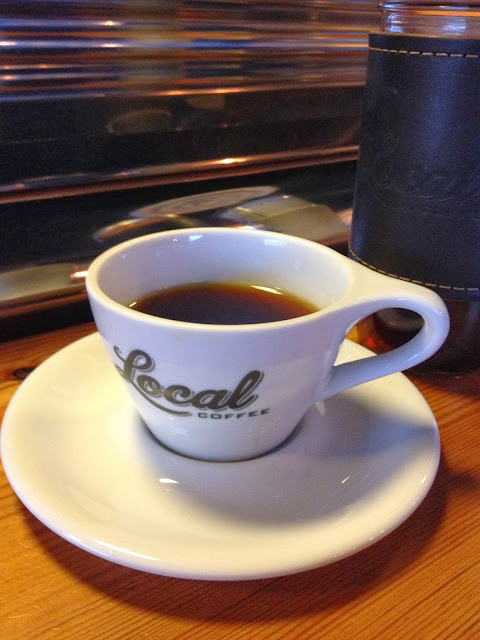