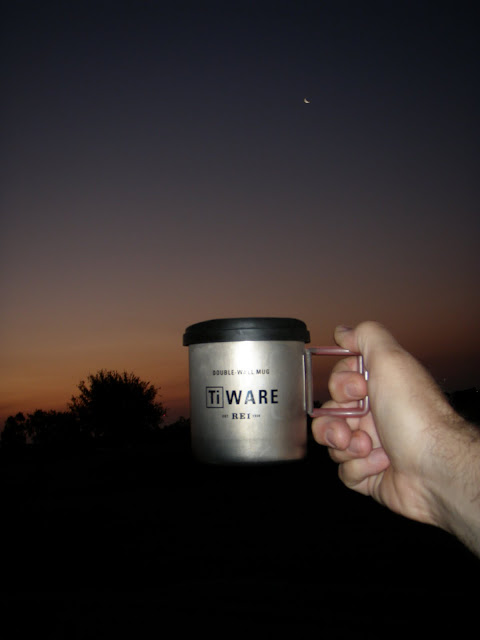 MUG: Double-walled titanium camp mug from REI. The plastic (not silicone) lid expands more than the mug when there is hot coffee in it. A sip becomes a dribble. Fail.

COFFEE: Guatemalan Estate from Barrett's. Happy camper, except for the dribble.

NOTE: I was trying to observe the alignment of the heavens this morning, as the moon, Venus, Mars, Jupiter, and Mercury are in conjunction just before dawn. Low clouds on the horizon defeated my attempt, with only the Moon and Venus visible. Hot coffee dribbling down my chin in the cool morning air seemed about right.
Posted by PM Summer at 7:34 AM No comments: 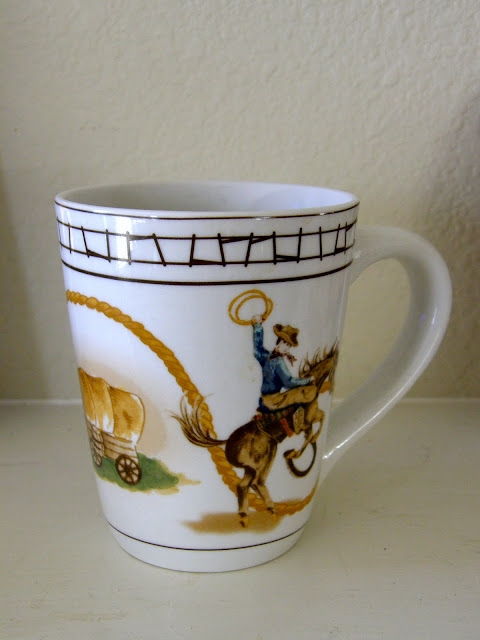 COFFEE: First try of another roast from Barrett's. Guatemalan Estate instead of the usual Colombian Supremo.

NOTES: Guatemalan coffee is my standard "change-up" bean. It has similar characteristics to the Colombian, and makes a nice change of pace to keep the palate alert. Barrett's has again provided an excellent medium (Full City) roast. This is a good supplier of fresh-roasted coffee, and the convenience of mail order shopping can't be beat.

The mug came with a dessert plate. My wife bought two sets for the grandsons to snack on, and forgot that the mugs were giant-sized (by kid standards). I can't quite figure out the hieroglyphics on the mug. Probably some Chinese artist's idea of Western cattle brands... or the Western alphabet. The giant cowboy is nice, too. Or is that a Shetland pony?
Posted by PM Summer at 12:45 PM No comments: 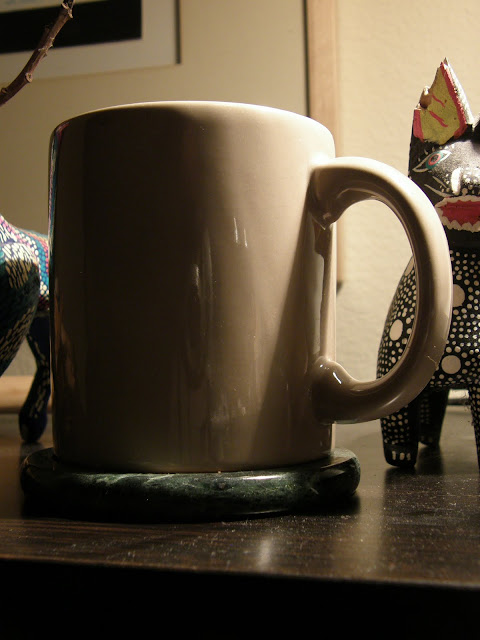 MUG: Waechtersbach of choice. No need to repeat my praises.

NOTES: I got a German-made Cilio ceramic coffee filter holder (No. 4 Melitta), and made a pot of coffee the old-fashioned way: just off boiling water poured over to wet, set, and then to fill. The best cup of coffee I have had in a long time. I'm using the glass-thermos carafe, as glass doesn't retain old (bad) flavor like stainless steel thermal carafes do. 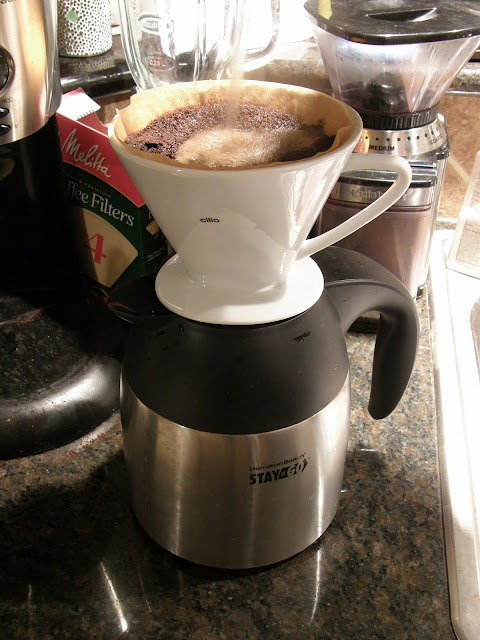 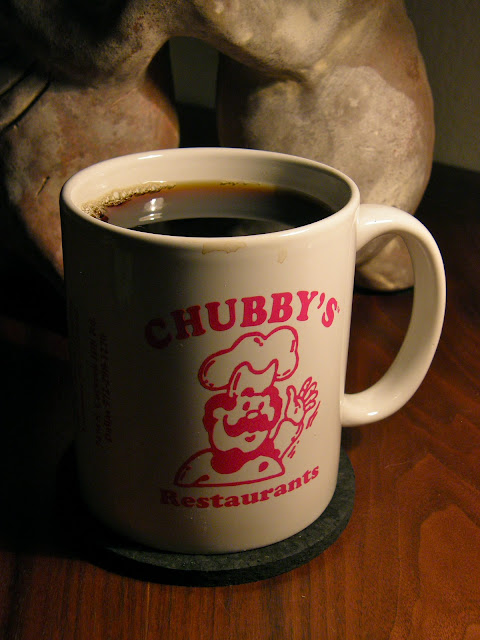 MUG: Specialty advertising Chinese mug. Standard issue.
COFFEE: The Colombian Supremo Bucaramanga from H.E.B.'s Cafe Olé selection of bulk coffees. Burnt and stale tasting, with none of the qualities that I appreciate from a well roasted Colombian. Second and last try of this convenient to purchase, but unpleasant to drink, coffee. It has been slashed from my list permanently. In it's favor, it does come from H.E.B.'s coffee section for "Straights".
NOTE: The mug (did I mention this before?) was a gift from the staff at Chubby's Restaurant on Northwest Highway in Dallas. Thank you, Alicia... the World's Best Waitress (and Mary, too).
Posted by PM Summer at 8:49 AM No comments: 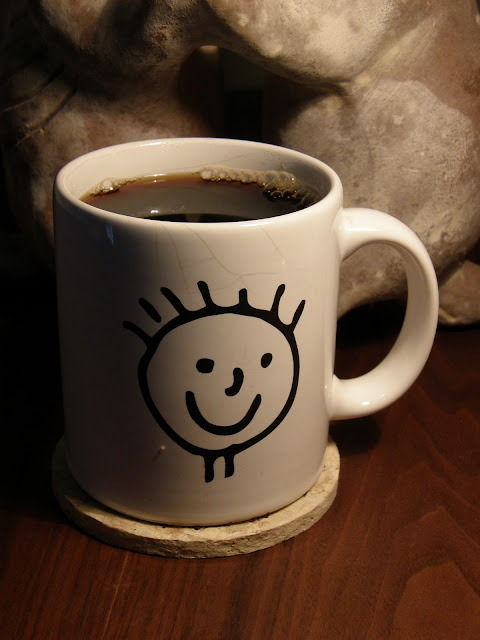 MUG: Waechtersbach (Germany). The decoration sort of tells it all (caffeine is your friend).
COFFEE: Colombian Supremo San Augustin from Barrett's Coffee roasters in Austin, purchased in whole bean form from Texpresso in Buda.
NOTES: The Great Colombian Expedition continues. This medium roast coffee is heavy on the dark side of the Colombian palate, missing the winey brightness that I anticipate with my first sip of a fresh Colombian. The aftertaste is oily on the tongue and roof of the mouth. Good complexity, excellent aroma, a taste of chocolate, muted with dense character. As of now, the jury is out. 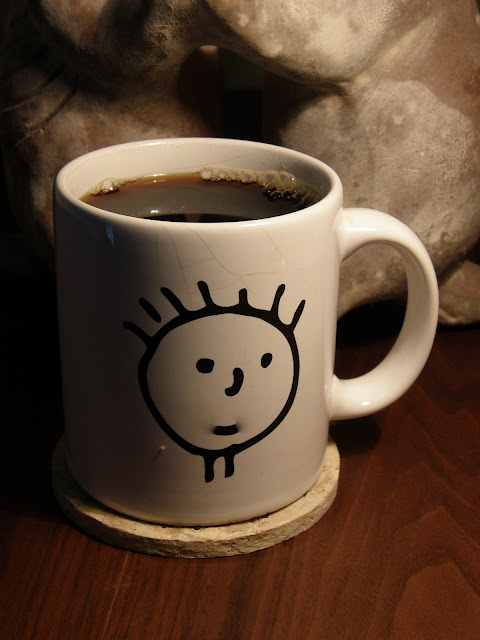 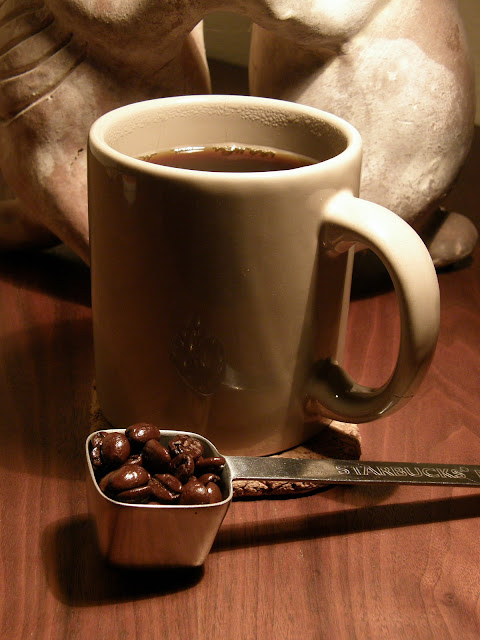 MUG: The standard by which all others are measured: West German made Waechstersbach, natural colored mug.

COFFEE: Nicaraguan organically-grown beans from the Matagalpa region, via Fara Coffee. Austin-based Fara Coffee roasts mostly beans from the owners' family estates (fincas) in their native Nicaragua. Most of their coffees are dark roast. Interestingly, these "Organic" beans don't seem to be listed on their website.

NOTES: First, the Good News (always). The coffee is a surprise. I thought I'd give it a try after seeing it in the bulk coffee bins of my local HEB-Plus grocery store. In the past, I have been favorably impressed with coffees from Nicaragua, but the various coffees I have tried from this store have been a resounding disappointment. Overly roasted (see the oily beans in the picture above), the taste remains mostly smooth despite the cruelty of too much heat for too long. I long for a Full City roasting of these beans.

Now the bad news. It is with a heavy heart that I announce the passing of an old friend. An inspection on the photo above will reveal the horror that my fingers first revealed... a crack in the recently unpacked mug's handle. This mug is one of the original set of four mugs I bought in Dallas upon moving from Austin in 1976. The crack appears to be in the structural ceramic, not just the glaze.

These mugs, in the natural slip color I like so much, have been out of the manufacturer's offerings for so long that a factory representative told me they'd never made mugs this color, physical evidence to the contrary (stupid young person). Another one bites the dust (leaving me with two, plus an inferior Spanish-made alternate).

A repair will be attempted, but...
Posted by PM Summer at 7:10 AM No comments: