MUG: A tin cup. Handmade in the U.S.A. since 1819 without electricity.

COFFEE: Nope. Not gonna do it. Wouldn't be prudent.

NOTES: Saw this in an Austin richie-hipster "Artisanal" hardware store yesterday. It epitomizes so many of the things I find intolerable about the faux-sustainable "creative class."

I've drunk coffee twice from an enameled steel cup. They were made in Mexico and cost about fifty cents. It's a horrible way to drink coffee. Nice for a sip of cool water, though, as I'm sure the featured $25 cup is as well.
Posted by PM Summer at 8:59 AM No comments:

MUG: Waechtersbach mug from Germany by way of Die Kuchen Laden in Fredericksburg. Not much else to say about this example of crockery perfection that I haven't already said.

COFFEE: Guatemalan Antigua, sourced from Central Market Westgate's in-house roastery. A perfection in coffee that damn near matches the mug's.

NOTES: Made the 40 mile round-trip to South-est Austin yesterday to buy coffee. The previous two times I've purchased Central Market's in-house roasted beans, they have been excellent, but there has never been anyone manning the roastery to speak with. Yesterday they were staffed up. There was a snooty hipster making drip samples in a precious Japanese imitation of the Melitta system, an "Old Austin Hippie" dispensing sample cups of Colombian Supremo coffee from a large pot (appropriately), who was also dispensing coffee idiocy. "Yeah, man, you know they don't really grow coffee in Colombia. It's just a distribution and processing center." He looked like he needed a job, so I kept my mouth shut (as should of he).

The Chief Roaster was on duty. A likeable fellow. I called him over to complement him on CM's not over-roasting their beans like the vast majority of coffee roasters in the area do. I was scooping the Guatemalan, and he asked me what I liked. "Mainly Guatemalan and Colombian, for their fruity flavor and general consistency," said I. "Ah, Colombian. The perfect coffee." he replied "You should try some of our Organic Colombian that I roasted the other day. I've been drinking a lot of it!"

So I bought about 20 ounces of each.

I did ask if they sold green beans, and I got an emphatic "No." 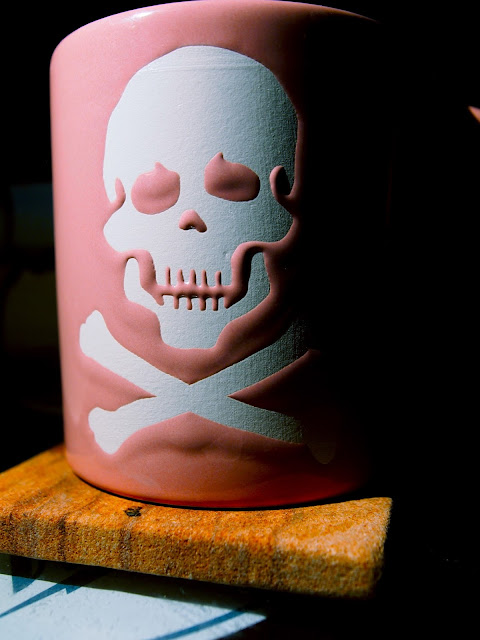 MUG: Oh look. It's another German-made Waechtersbach novelty mug. A pink death-head (as shown before).

COFFEE: An organic Colombian from Central Market's in-house roastery. A fairly light roast, which seems to be the style of the chief roaster at the Westgate CM.

NOTES: For years, I brewed coffee from beans sourced from What's Brewing in San Antonio (as sold by Central Market in Dallas). I liked them because they didn't over-roast their coffee. I thought I noticed a change a few years ago, but then we moved and I had to find a new source. After some trial (and much error), I discovered a micro-roastery in South Austin that didn't over-roast everything. Their Colombian and Guatemalan beans were old-school 'Full City' (before "full" meant oily). But lately, they have tended to produce by default a slightly darker roast than my preference. I buy my coffee from them in five pound shipments (three week supply), but I have neglected to request a return to the lighter style they used to employ.

Putting off ordering, I found myself out of coffee. I asked my dear wife to pick up some Colombian or Guatemalan at Central Market when she made a trip recently (40 mile round-trip... we don't go needlessly). She came back with the What's Brewing Colombian. The beans were dark and slightly oily, with the flavor many associate with good coffee, but which I find to mask the subtle flavors of a good varietal coffee.

On a return trip to Central Market this week (for the disappointing "Brewniversity" paid event), I picked up a pound of their in-house roasted Colombian. Not shiny. Not oily. Not burnt. Perhaps even a bit too light, but easily adjustable by adding to the coffee amount for a given pot.

Let there be light.
Posted by PM Summer at 8:46 AM No comments:

Let's have a sustainable party!

CUP: Insulated drinking cup, modeled after the infamous Red Solo Cup of redneck party fame. Unlike an authentic Solo Cup, this one keeps your beverage of choice cold, is rigid (a big plus when your are dancing) and is non-disposable. An environmentally sustainable alternative, one would have to go through about 25 of the genuine cups to cover the cost of this one ($3), but then again, that's 25 fewer cups in the landfill.

TEA: Luzianne Iced Tea, a blend of Orange Pekoe and Pekoe Cut black teas. Brewed using thermonuclear energy, one gallon at a time, on my side porch next to the smoker.

NOTES: I haven't yet monogrammed my cup with a black marker, but I will. I first heard/learned about Toby Kieth's hit "Red Solo Cup" at a NASCAR-sanctioned short track race here in Hays County. Doubling-down on my red-neckedness.

A hot cup of barth to start the day.

MUG: Chinese-made specialty mug, imprinted by Vistaprint (my new supplier of short-run irritants). Yet another imitation Waechtersbach-style barrel mug. Perfectly fine, almost invisible in design and function. The handle has a slightly trapezoidal shape, bulging out at the bottom in an attempt to afford an improved grip.

COFFEE: Guatemalan Antigua beans, roasted (on my birthday) at the Central Market store in the West Gate Shopping Center (roastery picture shown at bottom) on the south side of my demarcation line (Hwy 281). Tasty coffee. The bin describes the roast as Full City - Medium, and I have to agree, but it is considerably lighter than what most roasters consider a medium (Full City) roast. I think it's roasted correctly, but what do I know. I prefer the subtleties of lager beer, too.

NOTES: The inscription reads, Reject Religion / Follow Jesus. I had a few bumper stickers, two t-shirts, and this mug made with this logo-statement on them. The new digital printing industry has made such short runs financially viable, and allows theo-terrorists like myself to prototype products and messages. This particular message plays on a statement made by the Swiss Reformed theologian Karl Barth (friend of Dietrich Bonhoeffer) that "Christianity is not a religion. It is a revelation from God." To Barth's thinking, religion is Man's attempt to elevate themselves up to their god(s), to win approval through worship, to a god(s) usually in Man's own image. Christianity is God's turning that notion on its head. God came to man in man's image, to reconcile without warrant, by his grace. Religion interferes with the acceptance of that grace.