COFFEE: Nicaraguan Dark Roast. Four shots espresso. Steamed milk and froth, with a dash of cocoa-chili powder on top... proving that I put hot pepper on everything. First espresso grind with the new Krups burr mill. It passed the test.

NOTES: A cold front blew in last night dropping temperatures 30 degrees.
Posted by PM Summer at 10:43 AM No comments:

Special Report: the Krups of the matter. 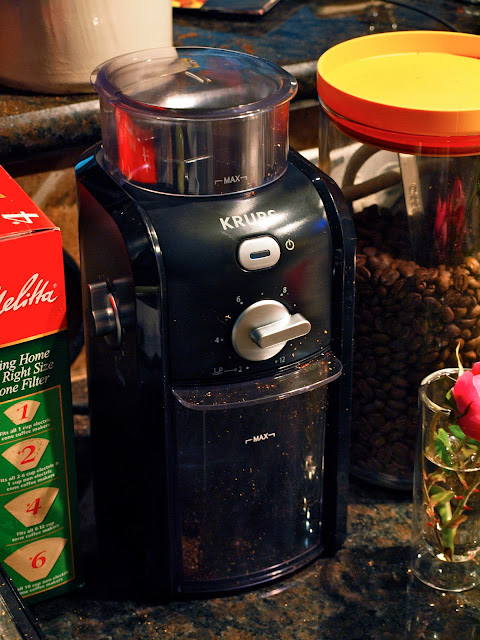 DEVICE: A Krups burr coffee mill has replaced the Cuisinart coffee grinder that broke last week. It is of German design, and is vaugely reminiscent of something from Fritz Lang's film Metropolis.

I did perform 'plastic surgery' on the Cuisinart using super-glue, and while that allowed it to grind coffee beans for the preceding week, it only allowed for a medium grind (the rotating sleeve seized as a result of glue creep). Plastic surgery often reduces range of motion and expression, i.e., Joan Rivers.

FUNCTION: Too early to tell, as I have yet to figure out the nuances of this device (what settings produce what results). I can report that it is quieter under load than the burr grinder it replaced, but that it is also lighter weight. Grind capacity appears roughly equal, although storage capacity is halved (which is a good thing, as a coffee grinder should not do double duty as a coffee bean canister). The first batch was mistakenly ground too coarse, but the flavor result was satisfactory.

NOTES: One of the reasons I chose the Krups (beyond my love-of-things-German) is my past experience with a Krups drip coffee maker, a cleverly-designed device that I passed on due to my dislike of its stainless steel lined carafe (before I discovered that oxy-clean powder solves the problem of keeping said carafes perfectly clean). 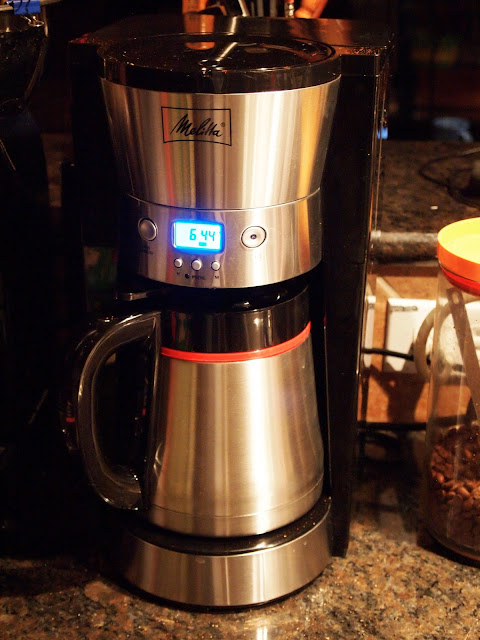 NOTES: As I mentioned below, there have been some major coffee-making changes here at Das Sommergarten. Our faithful Melitta-filter system Hamilton Beach™ coffee maker went away. It didn't die, but an identical unit we had given to one our daughters did die (internal water/electrical damage to the control IC), and so we gave her ours... and got a new maker for ourselves.

The new maker is a Melitta-branded maker with a couple of unique features. It's hot (I measured the brew-temp at 200F), and it has a variable brew-strength control that mimics the proper way to brew coffee with a Melitta filter system. By using the 'Robust' setting, the basket of grounds are soaked in water just below boiling point, and then the water-flow stops. Melitta used to say this was to allow the flavor to "burst," and I'd say that's accurate. After the initial wetting drains, the maker starts up again. This combination of properly hot water and seeping makes a better cup of coffee than most coffee makers are capable of.

The downside to this maker is the carafe. The old Hamilton Beach maker used a glass-vacuum lined thermal carafe (like an old-style Thermos™ vacuum bottle). The new one, like almost everyone I have seen on the market, uses a stainless-steel vacuum carafe. While far more rugged, the stainless steel carafes do not retain heat as well, and the carafe tends to retain old coffee oils and is much more difficult to keep clean. Brushed steel has far for surface irregularities that can trap coffee oils than does smooth glass.

FINAL NOTE: I should mention that Melitta is still a closely-held company from Germany who distributes their filters and drip manual coffee makers in the USA themselves, but their electric coffee makers are manufactured and distributed here by... Hamilton Beach.
Posted by PM Summer at 7:40 AM No comments: 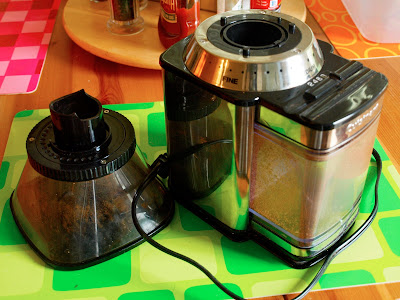 DEATH: Our cheap and messy (but perfectly functional) Cuisinart conical burr coffee bean grinder died this morning, after a mere 2,500 uses (approximate count, based upon entering service in late 2006 and grinding coffee approximately 1.1 times a day). The internal body/skeleton/core, which both houses the grinders and funnels the beans, broke into two parts.  Upper and lower pieces.

RENEWAL: I can make it work (as I did this morning) by pressing down on the lid forcefully, while touching my nose and ear simultaneously. I have looked into using super-glue to reattached the pieces, but I believe that would be a futile exercise in thumbly repair.

Tomorrow's remedy will be to either use my old blade grinder (if I can find it), or to use the Bodum blade grinder I have in reserve for either gifting, or just such an emergency.

Blade grinders are perfectly acceptable for drip coffee (as I usually make), a bit trickier for French Press coffee (which I make on rare occasion), and unsuitable for espresso (which I make about once a week when it's not summertime). I need a new burr grinder, and I know which one I want, one that balances design, function, and price. I'm not going to spend $300 for a grinder (or $200, or $150, but maybe $120).

COINCIDENCE: Interestingly, this coincides with the departure of our faithful Hamilton Beach coffee maker. It didn't break, but our daughter's identical machine did (a gift from us), so off it went to keep them jacked up. The new coffee maker we purchased (of interesting hybrid lineage) has now been in use for a week. A review of said maker was forthcoming when this calamity struck.
Posted by PM Summer at 8:33 AM 3 comments: