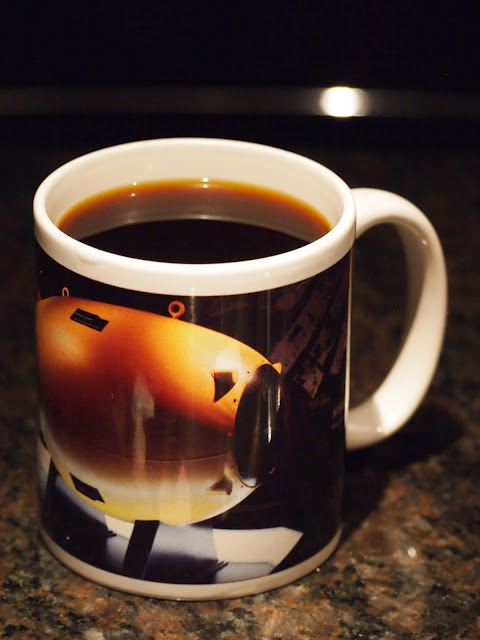 MUG: Chinese-made novelty mug. Standard ceramic mug. Drinks OK, neither excelling nor irritating. Its one possibly irritating factor is the very reason I bought it in the first place.

COFFEE: Brazilian Estate (which estate, I wonder?) from Barrett's Roasters. When a mechanical failure at the Barrett's 'plant' caused my monthly five pound shipment of Colombian Supremo to be delayed, I was gifted by them with two 1/2 pound bags of coffee beans. This Brazilian Estate is one of them. It's a bit different from the Brazilian Bourbon Santos coffees I've had in the past. They describe it as "nutty," and I have to agree.

NOTES: This mug was purchased at the National Museum of the Pacific War in Fredericksburg, Texas. What began life as a museum dedicated to the life and career of Fredericksburg's native son Fleet Admiral Chester W. Nimitz, housed in the old Nimitz Hotel, has evolved into a full city block of museum dedicated to the US servicemen and women who fought in the Pacific Theater during WWII. The image on the mug is that of "Fat Man," the bomb that was dropped over Nagasaki by the United States on August 9, 1945. It was the second atomic bomb used against Imperial Japan, and only the third detonated. Its use was authorized by my first cousin twice removed, Harry S. Truman. Its use effectively ended the Second World War, thus saving millions of American and Japanese lives, both military and civilian.
Posted by PM Summer at 6:33 AM